Yesterday, was a particularly Christmassy one. It involved a lot of icing sugar, sweets, ginger, cinnamon and a whole heap of baking trays. It was sweet to say the least.

I’ve always wanted to make a Gingerbread house but for one reason or another, I’ve never actually gotten around to it. And whenever I’ve suggested it to Oliver, he’s never been overly keen about baking the day away and trying to assemble an edible house.

But when I was out Christmas shopping the other day, I stumbled across a Gingerbread House cutter kit in The Works for a fiver and I thought, ‘Do you know what? This year, will be the year that we construct our very own Gingerbread House. To the till I go!’

And so I bought it.

And yesterday, on Oli’s day off, we went gingerbread ingredient shopping. And then we spent the afternoon drinking from big mugs full of hot tea whilst baking walls and windows and little people, to the soundtrack of our favourite Christmas songs.

The Gingerbread itself was pretty straightforward to make. The Works, had very kindly put a delightful recipe on the back of the Gingerbread House cutter box, so I followed that diligently.

Cutting the shapes out was also very easy, the cutters were pretty good and sliced through the dough perfectly. Transferring these cut outs onto the baking trays was a little more tricky and a little reshaping was required before we put them in the oven.

One top tip I would suggest is to make sure that your biscuit is rolled to the recipes specified proportions. Even if that means getting a ruler out. The Works, suggested a thickness of 0.5cm and in truth, ours was more like 1cm which leads to a more cake and less biscuity bake. Just a thought.

Another thing to note is that in the oven, the gingerbread will rise, expand and inflate quite a bit. So my advice would be to recut the gingerbread with the appropriate cutter as soon as it comes out of the oven, before it has a chance to harden. That way your sides and roof etc will be completely neat, relatively straight and squared off. It will make assembly all the more easy. We only did this on the sides of our house and not the front and back panels or the roof. We regret that.

Making and baking the Gingerbread is by far the easiest part of the whole, ‘Making a Gingerbread House’ process.

Assembling it is a lot more complex. And time-consuming and it requires a lot of patience, a strong sense of teamwork and about fifteen pairs of hands in order to keep the damn, sticky thing steady. If you apply too much pressure, your gingerbread will crack/break. 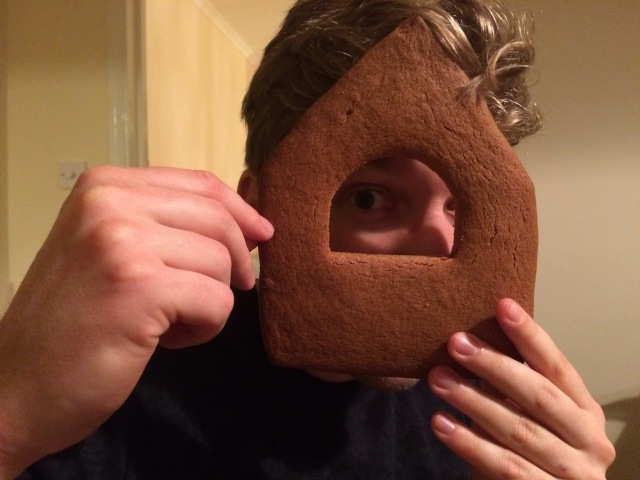 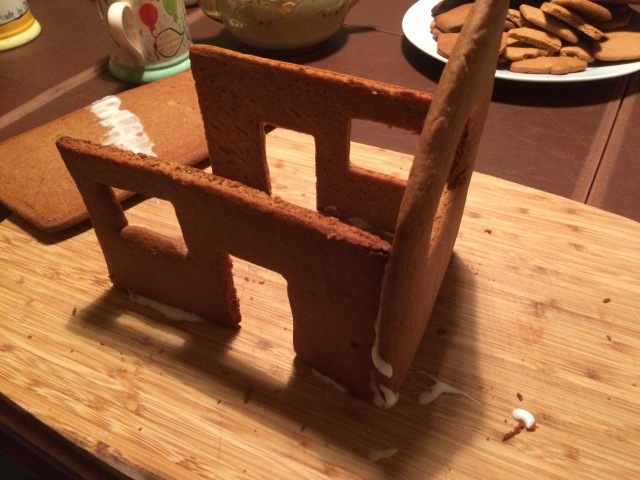 Surprisingly the main structure of our house was the easiest to erect (ooooh errr) and once we’d held it in place for about half an hour, we let go with bated breath, our eyes half closed as we prayed that it would still be standing as proudly, when we let go.

And by some miracle, it held itself together. We let go, stood back and cheered at the little, roofless house we had made. (My Dad rather aptly noted that at this stage it looks like a ruined Abbey).

Putting the roof on however, was an entirely different story.

The thing was that unbeknownst to me, I had unintentionally broken one of the two roof panels as I had taken it off of the baking tray. So we had a pretty significant roof issue.

After a bit more handling it snapped in two. I even tried to fix it together using skewers as dowelling (Great British Bake Off style) but that failed, rather catastrophically and damaged the roof panel even more. We tried gluing it together with the thick white icing that I made as our cement but that didn’t hold up either. So we had to go for the flat roof option instead. A very modern twist on the classic Gingerbread House.

But that didn’t stop us from resting the one good roof panel on the house and taking a few wishful photographs before giving into our necessary flat roof amendment.

Once the flat roof was on, the decorating could commence. This bit was fiddley to say the least and resembled the game Buckaroo exactly. I was scared that with each extra icing embellishment the house would collapse. But some-crazy-how our edible house remained intact.

I opted for a rather wonky looking brick work effect in a lovely red icing, on the sides of the house with snow dripping from the window ledge. And on the front and back of the house, I went for a snowstorm, snowflake shower with some candy cane detail courtesy of Poundland.

Oli made a really cute midget gem path all the way around the house and he also decorated a Gingerbread Oli and Becca, complete with boobs.

I also added a little Christmas tree on top of the house, covered in midget gem multi-coloured baubles. Our flat roof has a delightful sprinkling of Christmas sprinkles and a handcrafted chimney. Good job Oliver!

I’ve deliberately not featured a picture of the other end of our house because we were experiencing some construction difficulties and lots of cracks were fast appearing along with some Gingerbread warping.

With our little, slightly scary house complete, there was one thing to add. An icing sugar snowfall, via a sieve.

And there you have it. A Gingerbread House, made by two competent adults (aged 25 and 26) which actually looks like it was manufactured by a couple of over exctied and hyper four-year olds. But we tried. We gave it our all. And we had fun and that’s the most important thing, right? We had an afternoon/evening (because it took ages) of festive fun; memories were made.

But sadly, I don’t think this will be a Christmas tradition that we’ll adopt over the years to come. At least not until we have children.

The idea of making a Gingerbread House, is all very romantic and sweet but in reality it’s sticky, messy and it doesn’t turn out quite how you expect it. But that’s a bit like life, I guess!

I love it though and it makes me giggle when I look at it. And let’s be honest, it’s the only house we’re ever likely to own! I wonder how long our interpretation will stay standing? I’ll keep you posted.

© BeePea and thebeginningofthings, 2012-2015. Unauthorized use and/or duplication of this material without express and written permission from this site’s author and/or owner is strictly prohibited. Excerpts and links may be used, provided that full and clear credit is given to BeePea and thebeginningofthings with appropriate and specific direction to the original content.