Oli never used to like coffee. In fact he never used to drink caffeine at all because he was told that it was one of the triggers of his terrible migraines. The kind of migraines that you take daily meds for, that render you useless for the rest of the day and give you numbness and visual auras. They were awful. And he used to get them a lot, with no way of predicting when they would hit.

He recently got put on some new medication, which has had an fantastic effect. He’s gone from having migraines almost twice a month, to not having a single one in the last three months. It’s been pretty amazing, and I am absolutely thrilled for him.

The Doctor also delivered more good news and told Oli that caffeine couldn’t be a trigger, because he didn’t get a migraine immediately after consuming it. And so, the coffee tasting commenced.

I can’t remember exactly when he drank his first coffee but after I’d introduced him to a few different types, he caught the coffee bug, well and truly. And I had myself a fellow coffee enthusiast. Yipee!

There’s something incredibly social and satisfyingly cool about drinking coffee, especially out of a streamlined take-away cup. But my very favourite way to enjoy my coffee, is to make an occasion of it, a treat of it, to retreat to the welcoming haven that is the coffee shop. Independent or chain, I’m not fussy. To sip and savour a warm, delightfully caffeinated beverage with the man I love, makes me immensley happy. I enjoy the ritual of coffee drinking even more so, now that Oli drinks coffee with me. 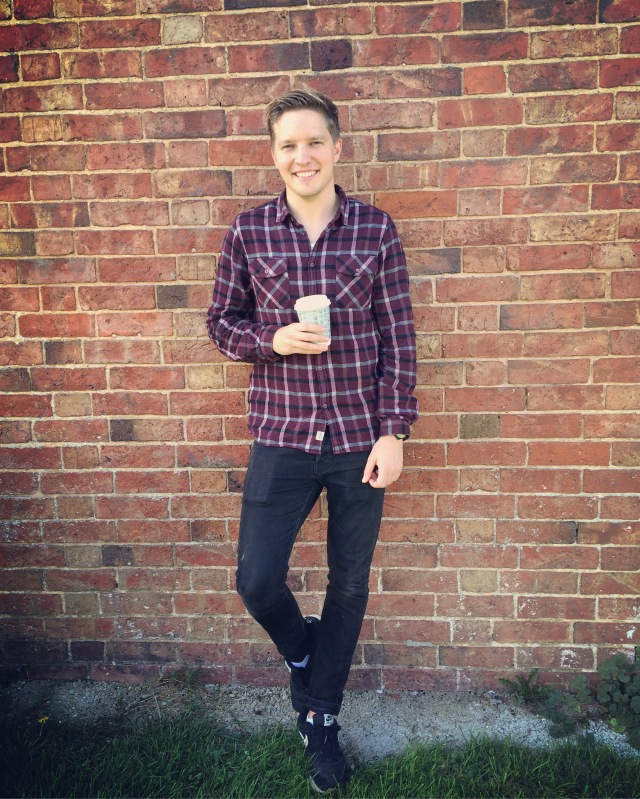 Before his coffee days, Oli used to opt for a Hot Chocolate when we were out and about. And I tended to quash my coffee desires when we were out together for fear of having the dreaded coffee mouth, because as delightful as drinking coffee may taste, it doesn’t smell the best when left to linger afterwards, on your breath. I suppose I always felt a little self-conscious about drinking coffee, for fear of my breath smelling and my non-coffee drinking boyfriend being mildly replused. At least, until I’d had a few TicTacs.

But now, Oliver is my coffee mouth partner in crime and there is no longer a need to worry about having coffee breath, because we both have it now.

And there is nothing I love more than a cheeky little coffee date with the man I love. It’s actually quite amazing how much joy ordering two cappuccino, instead of one, gives me. I can only imagine how wonderful discovering Autumnal and Christmassy variations will be later this year.

This Sunday, after an afternoon with family friends, we had a small one hour window on our own, before we needed to hit the road and head back home. All I wanted was a coffee. And it just so happened that we needed to pop to Waitrose to grab a few bits and bobs for that evening, so whilst we were there, we redeemed our free coffees. I opted for a latte and Oli, a cappuccino.

If you haven’t got a Waitrose card, then I strongly suggest that you get yourself one as a free coffee, after, before or during your supermarket shop, is really quite wonderful.

Our shopping bought, our complimentary take-away coffee secured in hand, we went for a little wander and ended up sitting, snuggled up on a bench over looking a pretty canal. The weather that Sunday, was crisp and clear and extremely sunny. Sitting there, gazing out at the water, a warm beverage in hand, was a perfect little slice of time, for just the two of us, chatting, laughing and savouring being in each others company before the lonely, weekday stretch of work and being apart, was about to descend.

We even used the brick wall behind us as a backdrop for a little end-of-weekend photo shoot, in an effort to remember this unexpected, cost less but utterly priceless time.

© BeePea and thebeginningofthings, 2012-2015. Unauthorized use and/or duplication of this material without express and written permission from this site’s author and/or owner is strictly prohibited. Excerpts and links may be used, provided that full and clear credit is given to BeePea and thebeginningofthings with appropriate and specific direction to the original content.